What is the Universal Field Theory?

The Universal Field Theory is not a physics theory in a classical sense. It is rather a philosophical theory explaining Why and How physical phenomena appear. In that way the theory is a complement to the more mathematically based theories, even though it comes to conclusions that would require adjustments of some of the main present theories when it explains issues that has stayed unexplained for more than one hundred years. Thus, it proposes solutions to a number of physical phenomena that baffle the scientific world, such as gravity, inertia and Big Bang. It gives logical explainations to why the world is relative in terms of time, it combines several of the concepts of the quantum mechanics and the theory of relativity, and it proposes reasons for supernovas and the difference between matter and antimatter.

"When an intelligent man expresses a view which seems to us obviously absurd, we should not attempt to prove that it is somehow true, but we should try to understand how it ever came to seem true. This exercise of historical and psychological imagination at once enlarges the scope of our thinking, and helps us to realize how foolish many of our own cherished prejudices will seem to an age which has a different temper of mind ."

Even with the help of the theory of relativity and our other major physical theories, which, incidentally, are not fully compatible, we still cannot satisfactorily explain the emergence of concepts such as:

Some questions in connection to these concepts:

There is a famous cartoon of a policeman approaching a man walking around under a street lamp. The police asks what the man is doing and he answers that he is looking for his quarter. "Where did you drop it?" the police asks. "Over there," the man says, pointing into the darkness. "Why are you looking here then", the police asks. "It's much easier to see here, in the light", the man replies.

We have been searching for answers in physics for a very long time, and yet we do not understand many of the most basic concepts. It does not seem unlikely that we are looking in the wrong places. Maybe because we have made some fundamentally wrong assumptions about some things. It would probably be some things that we are convinced are correct and that stand high above suspicion that they could be wrong, so high that no self-respecting physicist wants or even dare questioning them. But what if there are answers to all these questions? What if a theory can make all the phenomena we have mentioned above understandable?

That's what The Universal Field Theory does. It gives answers through a logically consistent field theory. Read the full article on the next page.

That today's physics is often difficult to understand can be illustrated by a statement from one of the world's leading quantum physicists, Richard Feynman: "I think I can safely say that nobody understands quantum mechanics"12). Whether that statement was serious or not could of course be debated, but without any doubt there is much in today's physics, not just in quantum physics, that is difficult to understand for both the common man and for physicists.

From the time of the philosopher Descartes13) there was a widespread belief that light has a fixed field as a carrier - an ether - much like sound is carried by the air. But the results of the so-called Michelson-Morley experiment14) in the late nineteenth century seemed to show that this belief could not be correct. Namely, one had been convinced that one would get something called ether wind when measuring the speed of light, that is, different speed of light in different directions. But in the experiment, nothing like that was found and the world of physics was puzzled. A couple of decades later, the theory of relativity presented a possible solution to the problem. However, the theory of relativity was difficult to understand, with relative velocities, length contraction, etc., and many could not, or did not want to, believe in it. In 1919 it was shown that the light bent around the sun15). This was in accordance with the predictions of the theory of relativity and the news was like an explosion in the world of physics. The strange theory of relativity seemed to be true!

Early philosophers were people who thought about how things (reasonably) must be. They created definitions of concepts and an understanding of the world based on that. One of the most famous early ideas came from Democritus16), who thought that the world was made up of small building blocks, which he called atoms. A name for this type of philosophy is realism17). During the nineteenth century, a new philosophical orientation emerged that came to be called positivism18). The main idea of ​​positivism was to base everything on empirical knowledge and experiments.

The physics of today is mathematics. And the mathematics is interpreted in our reality based on the best ability of the physicists. The philosophers, in turn, is lagging behind, as can be illustrated by Stephen Hawking's statement that "philosophy is dead"19). Of course, that statement can also be debated, and it is, but there is still a certain truth in it. The experiments in physics are carried out by physicists based on what they want to understand and based on their belief of how the world is. This means that positivist philosophers tend to lag behind the physicists, and to that extent one must agree with Stephen Hawking that philosophy as a driving force in physics is largely dead, at least if one confines oneself to positivist philosophy.

In accordance with the generally accepted principle of falsification20) by the philosopher Karl Popper21) one cannot prove a theory. You can only disprove it. It is also important to stick to the predictions you make if you want to consider that a theory is not disproved. Karl Popper took the example of psychoanalysis, which he said could explain everything, whatever results one got. This, he said, was due to the fact that the psychoanalysts did not rule out any possible explanations and that they explained everything in retrospect. Therefore, he considered that their theories were not valuable as scientific theories.

The theory of relativity also contains one very large peculiarity, namely length contraction8). The length contraction itself may not be so strange, but the consequence of it is - namely the need for different reference frames. According to the theory of length contraction, one can define a reference frame around each particle, or group of particles, up to the very largest constellations of celestial bodies or even galaxies and other things. Each such reference frame is considered stationary around its particle and in space, and thus everything else moves relative to the selected reference frame and have contracted lengths in their directions of motion. That is, they are shorter in their directions of motion than they are in their resting states (when they are in "their own" reference frames). This means that everything in our universe exists in (virtually) an infinite number of different reference frames at the same time with different distribution in different dimensions in each reference frame. We ourselves thus also exist in an infinite number of versions, together with everything else, in some form of multidimensional parallel universe where everything moves in basically the same way in each dimension, but with different distribution. This is a world no one can understand. You can only believe in it. It surpasses all kinds of imagination, and it is remarkable that one of our greatest sciences have to rely on something similar to make an important theory working.

That the world of physics still believe in length contraction can maybe be explained on the basis that:

The Universal Field Theory position philosophy in the front line of physics development again and provides possible answers to all these questions and oddities. Join us on our journey. Read the full article on the next page.

Where does the theory come from?

Where can I learn more about the theory?

If you want to learn more you can buy the book both as an e-book in international and Swedish book selling sites. You can also follow the link below to the publishing company.

If you would like to buy a pocket book you need to contact Fredrik Söderqvist. The price is 15€ plus sending from Sweden. 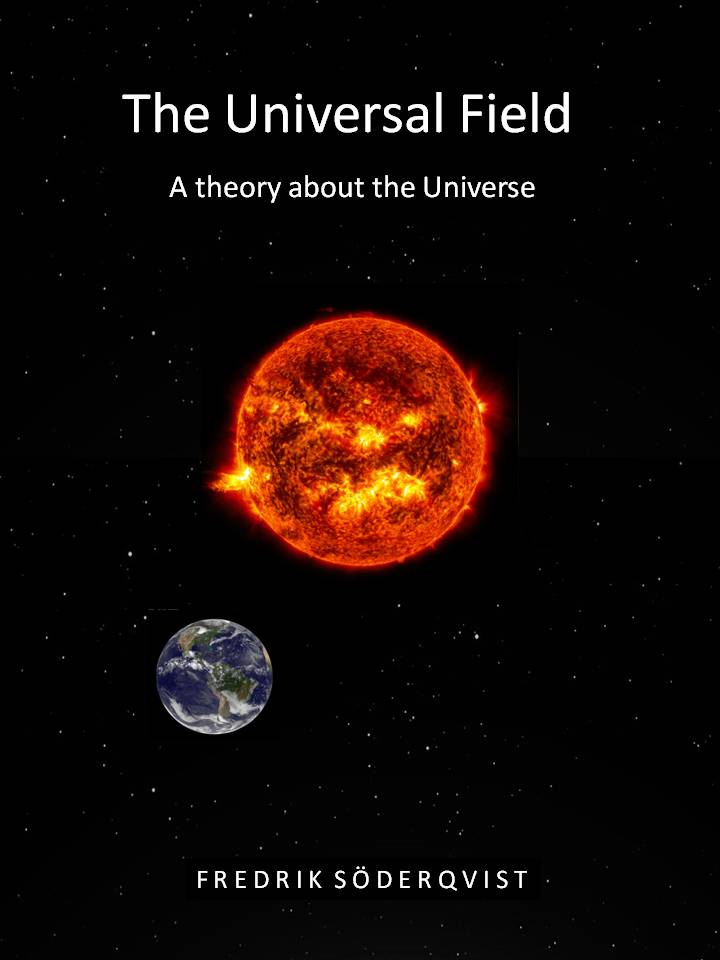 This site is owned and managed by Enma Förlag